Finally a TWIC reader solution that not only keeps you in compliance, but also enhance your throughput and bottom line

While most TWIC Biometrics reader systems only provide compliance and security, an HVPR system goes beyond security and provides incredible throughput, efficiency and a real positive impact on the bottom line.  Not by theory, but by real world application in a decade of past performance.

Techsphere’s VP-II is on the TWIC ICE (Initial Capability Evaluation) List as a Non-TWIC Operational Biometrics. 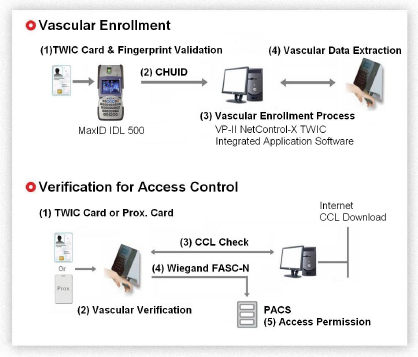 Techsphere’s enrolment process ensures that there is Continuity of Trust by verifying the TWIC card validity first, including checking the TWIC Cancelled Card List(CCL) and that the card carrier’s fingerprint matched the stored template on the TWIC card, by suing an integrated MaxID IDL500 TWIC handheld device which has already been ICE approved; Only after the card and user are verified will a user be able to enroll their VASCULAR biometric data. The VP-II X collects the VASCULAR biometric data of th e card holder for subsequent comparisons. The MaxID reader is connected directly to the VP-II NetControl-X TWIC application software for the enrollment process. 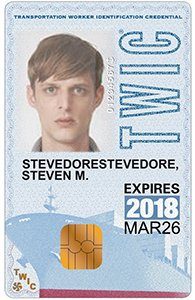 The VP-II X provides an option for CHUID-Only verification or a CHUID-plus-Biometric verification that can be set either by the Port Authority or automatically by a change in MARSEC level. The VP-II X checks the TWIC Cancelled Card List (CCL) using the CHUID at each verification process, and will not accept the card which is on the list. When CHUID-plus-Biometric is selected, the VP-II X extracts the VASCULAR pattern from the back of the hand of the card holder after reading the CHUID and compares it to the VASCULAR data stored in its internal or server database.

– User of either an existing card or a TWIC card

The VP-II X outputs a Wiegand code to a PACS(Physical Access Control System) for access grant or denial.

It takes less than a second per user for verification and access grant.