Choosing the Right Biometrics Solution is this Obvious 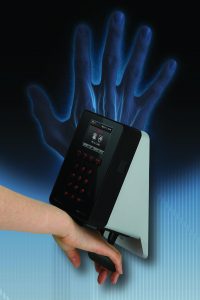 Be usable by the whole population (user group)

It is known that more than 5% of the adult population cannot use fingerprint systems. This is mainly due to the absence or weakness of their fingerprints. About 2% of people do not have proper fingerprints, and many people who use their hands intensively for work generate a very weak signal to fingerprint scanners.

The HVPR System provides 99.98% usability, which means almost all of the general population can use the system without any problem

Not leave a trace of the users residual features after use

If a biometrics system leaves residual features after physical contact, the features would be easily duplicated and/or forged. It is known that fraudulent fingerprints can be easily made by the residual fingerprint on the surface of the sensor.

The HVPR System uses the vascular pattern below the skin leaving behind no residual features and impossible to duplicate.

Be able to reject non-human features from being enrolled

Non-human features must not be allowed to be enrolled by a biometrics for it to be considered a true biometrics system.