VP-II X is a biometric scanner which verifies users individually unique vascular patterns extracted from the hypoderm below the surface of the skin of the back of the hand using an infra-red based sensor device (HVPR Hand Vascular Pattern Recognition technology). The vascular pattern cannot be seen by the naked eye and is not easily affected by scars or contamination of hands. This results in no performance degradation in harsh environments, makes it 100% tamper-proof and eliminates privacy concerns with other biometric modalities. By utilizing HVPR technology, 99.98% of the entire population is able to use the system accurately and with the verification speed of 0.4 seconds, eliminating user bottlenecks and the requirement of a separate backdoor.

The VP-II X Hand Vascular Scanner provides an excellent accuracy and verification speed (throughput) with the lowest false rejection rates. A card reader module for Mifare, DESFire, iClass, TWIC or proximity cards can be installed inside the VP-II X scanner. An external card reader can be also connected to the VP-II X scanner via the Wiegand or serial interface. 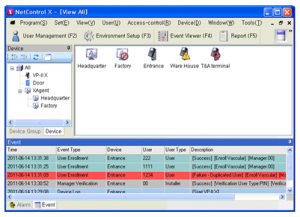 NetControl-X is a Windows based application software for managing VP-II X and/or Wiegand card readers, with an easy and convenient graphic user interface (GUI). NetControl-X monitors and displays the operating status of all devices, doors and locks, all access events and system logs in real time.

NetControl-X allows remote configuration or setup of all devices, remote door open or close, free timezone and restricted timezone per door. Enrolled users are managed individually or by group for access granted or denied to each door or area by area by different timezone or holidays. NetControl-X creates or exports reports for system logs and access events with various options, including reports for time and attendance control.

The VP-II XG is a Door Controller for the VP-II X Vascular Scanner. For security reasons, it is strongly recommended that the VP-II XG is located inside, on the secure side of the door; if mounted on the un-secure side of the door, an electric lock may be opened by directly supplying a battery without verifying the user’s hand vascular biometric pattern. The VP-II XG is connected to the VP-II X via RS232 (or RS485 with an optional module). The VP-II XG also provides connection ports for an electric lock (Dry contact relay outputs), exit button, sensors for door and lock monitoring, and fire alarm input. Hand Vascular Scanner – XC & XG.

The VP-II XC is a two channel Physical Access Control System (PACS) for Wiegand input devices such as a proximity or smart card reader. The VP-II XC is connected to the NetControl-X application software through TCP/IP Ethernet and operates in the same way as the VP-II X Vascular Scanner for access control functions, the only difference is that the VP-II XC validates only the card ID or PIN from the Wiegand input port, instead of the user’s hand vascular pattern. The VP-II XC provides connection ports for an electric lock (Dry contact relay outputs), exit button, sensors for door and lock monitoring, and fire alarm input. The VP-II XC provides 12V DC power for the card readers connected to the Wiegand ports. Each channel fully functions independently.